Please TAKE ACTION RIGHT NOW and send your letter to the UN Office of the Special Adviser on the Prevention of Genocide and the International Criminal Court Prosecutor.

During the 2014 Gaza war, for example, Manlio Di Stefano, a former computer engineer who acts as the movement’s point person for foreign policy, accused Israel of committing genocide against the Palestinians and of launching the conflict to block the development of Gaza’s marine gas fields. Speaking in parliament, he said Zionism was by definition discriminatory against minorities and called on the government to withdraw its ambassador and suspend all economic agreements with Israel… When asked by Haaretz about his 2014 “genocide” remarks, Di Stefano said he stood by them, but added that they had been made “in a particular moment, in which we were witnessing the death of 2200 people in the bombing of Gaza.” 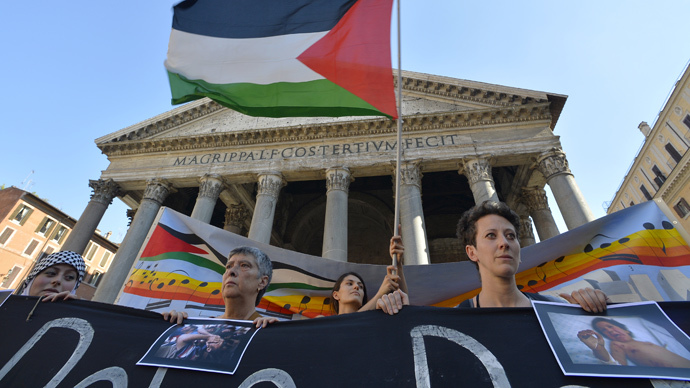 Hundreds of Italians have signed an online petition slamming Israel’s actions in the Gaza Strip as a “slow genocide” of the Palestinians and demanding a “Nuremberg trial” for Israel over the “destruction” of Palestine. The petition was signed by 525 Italians, mainly academics, Haaretz reported. The signees say they are dismayed by the events in Gaza and accuse Israel of pursuing colonial policies and “ethnic cleansing” of the Palestinians. The document calls for Israel to face an international tribunal, a Nuremberg-like trial, for its war crimes and the “slow genocide” of the Palestinian people… The online document also blames the US for supporting Israel, and the EU for “active or passive complicity” in Israel’s actions against the Palestinian people. The petition signees also accuse the United Nations of its failure to stop Israel. The Western media, according to activists, paints the events in the wrong light, justifying the Israeli offensive in Gaza as a self-defense operation.

Called ‘Noi Accusiamo’ (We Accuse), the petition was initially published on an academic website…

TAKE ACTION now and write a letter to the UN Office of the Special Adviser on the Prevention of Genocide. Make sure to post a copy of the letter in our comments as well, so we can publish it.